I belong to a poetry group in Hamilton.  Most months we set ourselves a topic to write a poem about. This month it was on the broad topic of "water". A few days after our last meeting I found myself in the bowels (appropriately) of Waikato Hospital, in a waiting room in a water world of old men.  For a consultation. I never seen anything like it before. All these old men shuffling about with plastic cups in their hands.  Some were carrying opaque handbags. Some were being wheeled about in wheelchairs.  The man sitting next to me went up and down to the front where he refilled his cup with water about six times.  Finally he went to the front desk and informed them (in loud voice) that he'd finished all their water. "Ask them for a bottle of rum" someone quipped from the back of the room.

After about an hour the older chap on the other side of me leaned over and said, "We're all old men in here and we spend most of our lives waiting" Yes I thought but I refrained from mentioning 'for Jesus'. On the wall nearby was someones poster from a conference.  Its title read, "Effects of brachytherapy on the quality of life and sexual function: patient outcomes." Looking about I wondered if many in the room would be interested in the results.  Most of them could read though and many had taken the wise precaution of bringing a large paperback book.

Three members of the NZ Department of Corrections came in, each with an old prisoner - 'lifers', I wondered. They were sat next to where the waiting public were giving their samples.  On the toilet wall were very graphic illustrations of how women were to collect their samples. Would the prisoners be interested, I wondered.

Finally, after one and a quarter hours, I went up to reception and asked to be excused, I had to leave to attend a funeral. That afternoon I made an private appointment with a Urologist. The upshot of the private consultation was that 'at my age' there was no point in intervention - I heartily agree and had wisely guided the urologist in that direction, by stating my attitude. Three cheers for the wisdom of urologists. No poem but I found this cartoon. 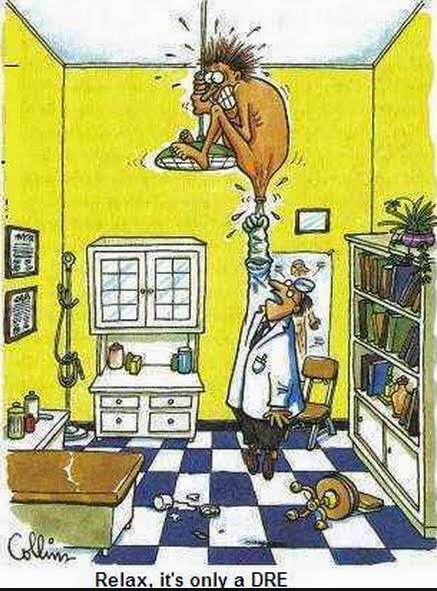 The main thing about living is your quality of life. I really enjoyed all my running especially when it was off the streets - and the endorphin surge when it stopped was so good. And one of the reasons I gave to myself for the effort was that, being fitter meant that my tramping and climbing would be so much more enjoyable. And with both running, tramping and climbing the company was so good. Thanks to those of you who've provided that camaraderie.
Posted by Barry Smith at 17:48