At last, the plan to visit the outer Hauraki Gulf came to pass. Four of us gathered at Terry Jeffries' place in Drury and proceeded to the Pine Harbour Marina and stowed our food and other necessaries aboard "Reminisce", Terry's beautifully crafted yacht. That night we dropped anchor in Owhaneke on Waiheke Island. and the following day sailed over to Barrier arriving at Oneroa (Red Cliff Cove) just outside Fitzroy Harbour at about 3.30pm. The main event of the day was when a distracted helmsman lost his bearings and the mainsheet on the boom caught Terry's arm as it swung across, taking a slice of skin with it - a plastic surgeon couldn't have done it better. An optometrist expertly patched Terry up, a veterinarian, while the other two managed the yacht and offered sympathetic comments.

The following day we motored through Man-O-War Passage and across to Fitzroy, anchoring inside Quoin Island. Like the night before we had time for nibbles and a drop to drink before one of us would cook (better to describe it as reheating the food our wives had lovingly cooked) and then after tea there might be time for a little rum-laced coffee or something similar. And apart from the occasional grunt, there were no snorers among us. This routine continued for the remaining nine days and, being a compatible group we were always discussing something of mutual interest. A frequent topic was the origin of the 'snap, crackle, pop' we heard often on the hull (it seemed) and Geoff suggested the theory of 'snapping shrimps'. The role of phosphorescence was also suggested. Breakfast, by prior arrangement, was each organizing his own.

Our first outing in Terry's little dingy was to the Akapoua campsite to get our land legs back (!) and in the evening talked to David, who was Acting-Manager for the DoC presence on the island, and who gave us good advice. The next day we walked into a beautiful small waterfall on "Warren's Track" a short jaunt. At the end of the walk we braved the cold showers DoC supplied in the camping ground. We were taken with the Pateke (Brown Teal) which were plentiful about the bay with one of them even paying the yacht a visit.

We motored around to Bush's Beach on Kaiarara Bay and the next day we headed off relatively early for Mt Hobson on well-formed and graded tracks. In the upper mossy mist zone, we spied many Entaloma hochstetteri, the beautiful blue mushroom found on our $50 notes, more than I've ever seen before. 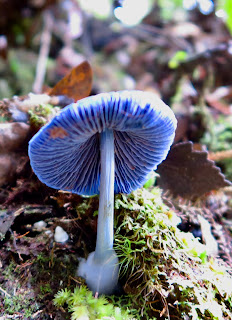 We found clusters of them every minute or so as we struggled up the steep upper steps. There must have been over 200 of them - thousands if you consider that we only saw those visible from the track. I was in photographers' heaven and had to be encouraged along the track by my companions - hungry for the lunch we were to have on the summit. And get back in time for tea. The track was great and even the steep steps appreciated by some! 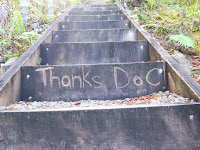 At lunchtime, we were joined by several other climbers of Mt Hobson. I was amazed at the number of times I heard the word "Paradise" in the conversations. Yes, I agree.

After lunch, the blue mushrooms continued down towards the Heale Saddle hut - a delightful new hut with a grand view. We continued down on our chosen circuit - an excellent track until it petered out near the bottom due to riverbank washouts. After the usual evening drinkies and nibbles (and a meal) we retired to a well-earned rest.

After a lazy start, we moved over to the "Smokehouse Bay" visited by Geoff many years ago. What a magnificent place.  Now run by a Trust, the bay has all the facilities boaties could want, baths, pizza facilities, whatever - everyone should find some firewood. And that evening we cruised up the harbour to find a gentle anchorage ready for the next day. After breakfast, we motored back through Man-O-War passage and southwards down the coast to Whangaparapara where we anchored and visited the old whaling station and the timber mill.

The next morning three of us did a great circuit ending up at the hot springs which we relished and then returned along the edge of the Kaitoke wetlands - and so home to our floating palace.

But it was just as we were getting off the dingy onto the yacht that we had the fright of our lives, We hadn't seen them coming but suddenly three Orca surfaced only five metres away. I think that Geoff who was the last to get out of the dingy cleared the yacht railing by about six feet! They were so impressive close-up. We thought that they were hunting stingrays. We watched them for some time and it seemed that there were two groups of three in the harbour. They were not aggressive towards us but were so close that they had to change course sharply to avoid the yacht.

I made contact with friends of both myself and Geoff who happened to be on Barrier but by the time arrangements to say hello were being proposed we were well on the way to Kawau. And so the next morning we set sail with a tailwind. There was much enthusiasm from Geoff for the spinnaker and although we set ourselves up for the spinnaker we just made do with the mail and jib, goose-winged out with the spinnaker pole - we made good progress.

Dolphins gave us a short visit along the way. We relaxed and rested safely before Governor Grey's old residence but decided later in the afternoon to move around the corner to a gentler mooring. Here we happened upon Terry's sister and several other members of the family. They invited us to moor on their jetty and we spent a very pleasant time having drinkies and nibbles with them - delightful situation. That evening we anchored just off their jetty and next morning headed off back to Reminisce's permanent mooring via a couple of short 3-4 hr hops over two days.

And so ended a very pleasant sojourn amid amiable companions and in a great part of New Zealand. One mystery remained from the trip. Geoff always finished his meals with a perfectly clean plate. We could never fathom how he got it so clean and we could never catch him in the act of licking it clean. The mystery remains.

I'd never been to GB before and was much taken with the surroundings and the well-maintained tracks. There seemed to be something wrong with the kanuka (?manuka) on a couple of parts of the island. We wondered about myrtle rust (or such like) but never got close enough to get any samples. 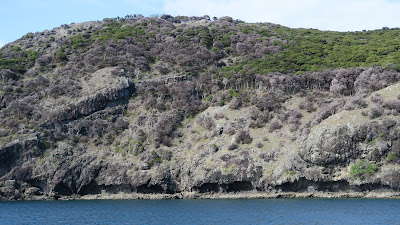 And finally, I've done a bit of offshore sailing about the Pacific (always as crew) and as for the Hauraki Gulf, I reckon it offers some of the most enjoyable sailing imaginable. There are wonderful safe anchorages all over the place and you can pick and chose your sailing days according to whim and weather. And the islands are wonderful, each with its own character and history. A sailor's paradise.