Mike White and I decided to do a four day cycling journey through the West Coast last August - NZ had done its best and we'd ridded ourselves of the dreaded COVID-19 disease - we deserved a break. After a short sojourn at Arthur's Pass the journey started at Hokitika where we left the car. We were transported to Ross from where we cycled back along the coast to Hokitika via the Tree Top Walkway - very impressive.

Next day we journeyed inland to a place called Cowboy Paradise. There were eleven in our group doing the cycle. At Cowboy Paradise some local flavour was added by two farmers plus the local baker and butcher joining us for a beer. The meal was good and we were pleasantly chatting afterwards when some raunchy music came on and out came our Chilean receptionist in shiny black leather and started pole dancing on the table top. We were most impressed and it turned out that she had learned the skill in Chile and had practised it while on her OE. It wasn't sleazy at all.  Good fitness exercise.
On our third day we cycled through bush and down into historical areas. We burst out of the bush into a small clearing where a local had a holey tarpaulin. It was slung over a warm fire and an urn of hot water for a tea or coffee. He regaled us with local history and his business (port-a-loos) and Mike and I spent over an hour yarning with him, There were the remains of a 150 year-old wooden dam in the stream nearby - amazing what these 'coasters' achieved in those early days.

We carried on down on excellent bike trails ending up at "Beths Shed" (we'd met Beth on the way to Ross. She was a neighbour of Mike's in Christchurch years ago, a coaster who'd returned home). We spent a pleasant time in her unusual shed and enjoyed her hospitality. 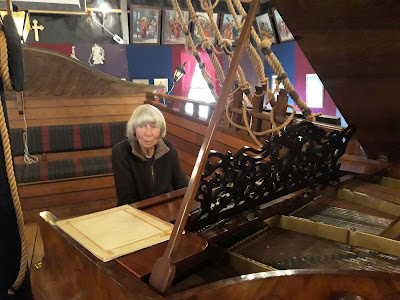 That evening was spent in Kumara and the following day we cycled to Greymouth - mainly along the coastal dunes. The weather had been excellent and we returned to Christchurch via Arthur's Pass. Ann looked after us - Jim had gone skiing - we wished him good luck, there wasn't much snow about. A very satisfying four-day cycle - and much recommended.