How I Learned to Play Cricket

Cricket didn't come until we moved to Christchurch and I was about 14. Other boys seemed to be playing cricket so I decided I should try too. First it was a ball in a sock on a string suspended from my mothers clothes line. Straight bat was what my book on cricket said. Then there was bowling a tennis ball up down the concrete drive at home. If I bowled fast enough the ball would bounce back from the shed door and I wouldn't have to go so far to get it. Then came tweaking the ball with my thumb to make it spin - I could even make it curve in the air before doing an off-break. But then there was the hard cricket ball and for a while I had to try and get my hands on one at school during the breaks. I did eventually get one at home - a composite one - and then Uncle Trevor came to visit.

He was a keen cricketer and was talked into bowling to me down the drive. My mother whose kitchen was at square leg from me warned him not to bowl any down the leg side. "No worries" he said. But eventually his concentration lapsed and I hooked the ball straight through the kitchen window. Glass flew everywhere. My sister, Karen, was helping my mother in the kitchen. The ball flew past her and knocked the pressure valve off the top of the hissing pressure cooker - screams, steam and glass everywhere and a very angry mother and sister as well. Luckily I had Uncle Trevor to share the blame with but he left soon after. And about that time, my sister, Karen, was being introduced to the art of cricket. She was acting as wicket keeper and I said I'd demonstrate how to hook a ball. She must have been standing up close behind me and I gave her a beaut black eye with the bat. More abject apologising.

Anyway at school I never distinguished myself any further than the second eleven - and in that neither as a batsman or a bowler. I did get a prize once for being the best fielder - but that just meant that I ran after cricket balls like a happy dog and maybe took a few catches in the slips. I do remember one occasion when after all our bowlers tried, unsuccessfully, to get the opposition's best batsman out - he'd got to nearly 100 runs, they threw the ball to me as a last resort. Give Smith a go for once seemed to be the idea. Anyway I decided on only one thing - good line and length - and I could see the champion batsman relishing the chance to introduce this new kid to the boundary - and out flew his middle stump on the first ball. "What a good fluke" they said. 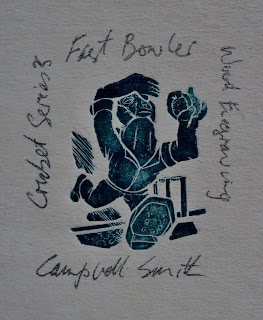 Anyway that was cricket for me - until I arrived at Ruakura - my next door scientist friend suggested that I have a game or two for Ruakura who had fielded a team in the local President's Grade. Nothing much happened and I always batted at about number 8 or 9. I remember being very impressed at the way the ball could hiss past me on the way to the wicket keeper before I could even swing the bat at it. And then there were a few beers at the local hotel while our early batsmen tried to score a few runs.

So one day they asked me to do a stint of umpiring. It was always the batting side that provided the necessary umpires. I've never umpired before - "I don't know what to do", I pleaded. They assured me that as a scientist I should be able to count to six (the number of balls bowled in an over) and sent me out. All went well until I noticed that the bowler was dragging his foot over the crease. He did it again so I shouted, "No ball". Next ball he did it again so I 'no balled' him again. I had to cure this bowler of his bad habit. After the third time he apologised and asked what he was doing wrong. I told him about dragging his rear toe over the crease and it wasn't allowed. He explained to me that this rule had been changed about nine years ago - the front foot now had to not go over the popping crease. " Play on", I said and we adjusted the extras that had been marked against his side. That was one of the last games of cricket I participated in. 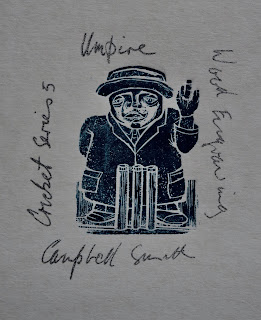 But then there was the time I was ordered from the wicket on the famous MCG (Melbourne Cricket Ground) but that is another story.

The photos are taken of wood engravings by the late Campbell Smith - one of NZ's leading wood engravers.