Today was hopeless.  We just drifted all day.  Our progress was 5 nautical miles east all day!  Another swim – great.  About now Dave, who had been having trouble with disrupted sleep because his head poked out of his quarter berth into the main cabin, decided to sleep with his head up in the stern.  This was better for all of us, more sleep for Dave and less nightmares for the rest of us – we figured that  Dave’s feet were much more attractive than his other end.

Next day we got our first sight of human existence for 19 days.  A largish fishing boat appeared on the horizon and passed just astern of us.  As it approached I suggested turning on the VHF and onto the emergency channel, sure enough, we hear,  “Amigo, amigo” repeated a couple of times.  Must be South American we say to one another.  We reply.  They seem to have problems understanding us.  And they sound Oriental and confirm it with “we Chinese”.  Simone offers some mandarin phrases for “how are you” and “thanks”.  This invokes some laughter from the Chinese so we offer goodbye in Mandarin (they are now moving away behind us).  More laughter and finally “Bye,Bye – and laughter” and then silence, as should be the case on emergency channels.  But the VHF range is about 40km so we had no concerns about us blocking emergency calls out there!!

The thirteenth of June was Simone’s 30th birthday and she seemed down.  We made her a birthday cake with three candles and sang ‘Happy Birthday’ out of tune.  We even added a tin of fruit salad but it doesn’t seem to buck her up much.  We found later that she’d been feeling lonely and was missing her family and friends.  Her attempt to call them on John’s satellite phone had failed and that hadn’t helped either.

We poled out the jib for today.  With the wind behind us though, and with the sails shielding the solar panels from the sun, power generation was a problem.

Today was the same as yesterday but today at dawn Simone was all smiles.  She had been the first to see land.  Up ahead off the starboard bow was the first of the Australe Islands, Rurutu.  It is all we could do to stop her from steering towards them.  Several reasons we told her, the main one being that we had no motor and wanted to keep our exposure to lee shores to a minimum.  The gannet like birds we had been seeing for a day were seen diving after fish and we saw a few flying fish scarpering between the waves.  More tropic birds too.

Yet another day of no progress and a flat ocean so all we did was have another swim.  Dave made a fish pie.

No Motor - No Power - No Steering - No Wind and the Reef

The wind picked up on the 17th June and we made good progress northwards.  The inactivity lead to a bout of cabin fever but after a little discussion it all calmed down.

Throughout the night the wind came and went in a frustrating manner but by the afternoon we are sailing among tropical downpours.  At this rate we expected to get to Papeete in a couple of days.  We only had about 160 nautical miles to go!!  More tropic birds were seen in the morning.  They were much more attractive that I remember from previous visits to the tropics.  They seemed attracted to and were interested in the yacht.  We could now see Tahiti – very impressive with its jagged skyline.

The nineteenth was John’s birthday.  I got up with the birds to bake the bread and we flew  along at about 6.3 knots on the auto helm, which was much easier and gave us more chance to talk together.  Our spirits were up now as our journeys end was near.  At 7.30pm we had only 60 miles to go but chose to head to the west of Moorea to avoid tacking up the channel to Papeete, which, with the present wind direction we would have had to do.  Throughout the night we keep well out from the coast  - not a lee shore then but we had no intention of allowing it to become a near one after a wind shift.  In the morning I become aware of John and Dave were having problems going about and getting going again.  Something seemed wrong.  We skirted along the north of Moorea and tried heading up the channel.  To no avail.  We just seemed to reach backwards and forwards across the north of the channel – almost seemed to go backwards rather than forwards.  It is almost as if a strong northern current from the channel was keeping us from making progress.  We tried all ideas, tacking on the Moorea side and tacking to and fro on the Tahiti side of the channel.  Finally I had a fiddle with the ‘non-functional’ self-steering rudder and lo, the sails begin to luff.  I tried centring the smaller rudder by lashing it in position.  On our next tack my adjustment was proved right as Tetega suddenly surged straight up the channel towards Papeete and we are on our last run.  A minor tack to get ourselves on course and we were soon in line with the Papeete markers and flew in with all colours flying – literally, the yellow Q flag, the French flag and the NZ flag all flying from the starboard spreaders.

About a kilometre from the harbour markers, and without any warning the wind just suddenly stopped.  Stopped dead – from about eighteen knots to zero in about five seconds.  We gaped; we swore; and we were dumbfounded.  After about five minutes the most gentle of breezes started to blow from the other direction and we started to make pitiful progress towards the gap in the reef.  About half to one knot!  Finally it too gave up the ghost when we were about 200m from the reef.

Darkness wasn’t far away and we were just sitting there.  Most of the last of the ferries from Moorea had gone past and a speedboat, but nothing that we thought could help.  We looked ashore for signs of smoke moving.  The only smoke we could see was going nowhere so with the breakers of the reef not far away we had to call up the harbour authorities and ask for help.  After some confusion the tug came out and towed us in at great speed.  I nearly fell overboard – that would have been the final ignominy.  I thought no one had noticed but later Dave had great delight in reminding me, and everyone else how close I’d been to going overboard.  Nothing gets unnoticed on a yacht.  A great vignette for me was in the gathering darkness when a group of three va’a (Tahitian wakas) powered past us as we were towed in.

The tug did a great job and tied us up on the main frontage with four lanes of traffic heading past at what seemed incredible speed.  After 27 days at sea  we staggered about on the roadside like drunks.  We were illegal immigrants but, undeterred, we zig-zagged across the road to a cold beer that was beckoning.  We compounded our sins even more by escaping into the back blocks of Papeete to have a slap-up meal.  This was all in our dirty smelly cloths but the restaurant turned out to be the best in Papeete.  The staff coped with us well but the clientele were seen to be averting their eyes.  Finally we behaved in an even more anti-social manner when we found a fresh water tap and hosed ourselves down within a couple of metres of the roaring traffic.  That night we slept like lambs in the stillness of the harbour; John asleep with a permanent grin on his face. 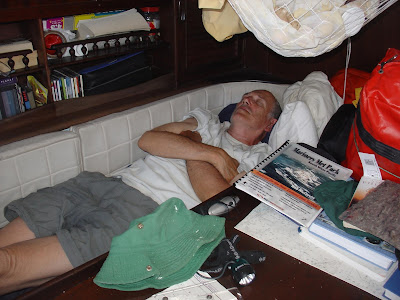 Next morning we were processed through customs and immigration and taxied out to the Royal Tahitian where Catherine was waiting with the starter motor and a big hug.

About this time John discovered that the jumper lead thickness wire that had been used to put the batteries in parallel was now a bare wire, the plastic covering having been melted off.  We assumed that this had happened during the starter motor melt down and felt rather lucky that this hadn’t shorted the bank of batteries and caused another fire. For a first long distance ocean voyage John had experienced more than the normal share of problems.  With a little help from us (Dave mainly) he’d battled through his baptism by fire and come out the other end with flying colours.  Two of the crew had a meltdown before we started and you might wonder how we had fared together.  Well, for such a shaky start we survived very well.  We had our moments as might be expected if you took four human beings and shook them all up in a small wet cabin (reality shows - there’s an idea) for 27 days.  However the very few little spats that occurred were quickly resolved by mature discussion.   Simone eventually opted to leave the yacht at Papeete – but after they had been to Pitcairn Island and John had broken his leg there! - her father in Holland was ill.  They eventually made it to Bristol in UK - and finally back to New Zealand.