Epic Yachting from Auckland to Tahiti - Part One "The Storm"


We had a shakedown cruise about the Hauraki Gulf to become familiar with the yacht and with one another. The only near tragedy was when we made a dingy visit to the mussel harvesting crew and almost swamped our small boat when the mussel workers overdid their generosity when giving us some mussels to have a feed - and more.

But a few weeks later when I arrived from Hamilton to join ‘Tetega’ in Auckland the other two crew had already had a domestic, in, of all places, the local supermarket.  After the spat they settled for separate trolleys and stocks of food.  What sort of couple is this, the other shoppers must have wondered!  The other problems with leaving Auckland were all the well-wishers, bless them.  Each time we tried to get last minute things done the cell phones would ring or an alcoholic pudding would arrive.  We prevailed through their greetings and an invitation to dinner, which we wouldn’t have missed for anything, finally getting the last of our list crossed off.

Finally we sighed at the now empty marina finger, threw ashore the last of our mooring lines and motored over to customs.  Two other yachts were in front of us but neither of them took as long to clear as we did.  John, our skipper, had filled in his name as John when his passport showed him as James Jonathon – just the sort of thing terrorist conscientious government officials love to get their teeth into.  The crew grinned while the skipper squirmed.

We were cleared now and in answer to yet more phone calls from fans we motored a few ‘wave-pasts’ of the pre-advised pier and turned our faces towards the top of the Coromandel Peninsula. 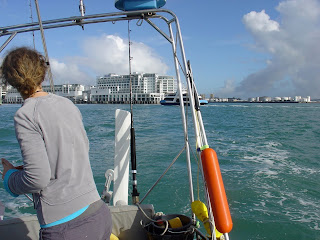 Darkness fell as we entered the Colville Channel and headed to the right of the Cuvier light.  By dawn the land had gone and one of the watches reported us striking something in the night, a log we thought.  We headed east, the proposed route being to head east towards longitude 155W and then head northwards towards Tahiti.

After the first couple of days we discovered that the ‘house’ battery was not charging – we couldn’t determine why although there was much searching among the maze of wiring.  A good use was found for the satellite phone and John phoned a marine electrician in Auckland.  The result of this was that we wired all three batteries in parallel.  The downside of this was that we wouldn’t have a reserve battery for starting the motor and would have to constantly check that the batteries were being kept charged.

The watches were arranged so that we each rotated through three two- hour watches each day.  I did midnight to 2am; John (the skipper, scientist, mountaineer) did 2 – 4am, Dave (crew, from UK chef, diver and entrepreneur) 4 – 6am and Simone (crew, free lance documentary maker and amateur anthropologist) 6 – 8am and so on.  During the day the watches were somewhat informal but during darkness we strictly adhered to them.  At night and when alone in the cockpit we always kept attached by our harnesses to either a cockpit U-bolt or to a lifeline which ran from the bow to the transom.  No one fancied the idea of climbing up into the cockpit at night and finding one of us gone so we all disciplined one another on this score.

Early in the trip a very annoying creak developed in the forward area of the boat.  It annoyed hell out of Simone who slept (or tried to) in the forward compartment and the noise eventually got under all our skins.  After us initially trying to pass it off as just another yacht noise John tracked it down to movement in a bulkhead ply sheet and after considerable effort with chisel and spanner managed to eliminate the beast.

A swell from the south was building up and the signs were ominous.  That night we reefed the main.  I was still a little unsteady on the boat and this resulted in me taking a plunge across the cockpit, ending up spread-eagled with my head between (luckily) two winches and an arm with a large haematoma.  Luckily I was otherwise intact and able, except when I tried to rest the offending arm on something.  The wind and swell died and we did some motoring the next day.  When the wind returned from the SE we got in some good sailing but it strengthened throughout the night with us flying at 7.5 knots and having to ease the main and put away the headsail.

The next day the wind increased through 30 knots and into the 40s and we had wind gusts into the 50’s.  The swell reached large proportions with some tops breaking and spume spreading about the sea.  We estimated the swell to be about nine metres.  It was time to put out the drogue – the item I’d made and cluttered about our house prior to the trip.  It went out OK but with us experiencing some difficulty in arranging the yoke.  Once out it had a good slowing effect.  That night we just drifted and sheltered below.  We could tell by the sounds what was happening, and occasionally by the showers of water squirting through the hatchway boards.  In the middle of it Simone expressed some concern for our safety.  We did our best to reassure her with words of confidence and comfort food in the form of chocolate bars.  We hoped our nonchalant munching of chocolate would reassure her but the truth was that none of the males was going to leave any chocolate uneaten as we descended to join Davey Jones.

The morning revealed massive swells and some damage to the yacht.  One of the stanchions alongside the cockpit had been bent in.  The huge effort required to bend it back so we had access to the fore deck gave us some idea of the clout the yacht had received when the damage was done.  Later in the day we pulled in the drogue (with some difficulty, involving the winch) and started the drying process.  Throughout the storm everything inside the cabin had become wet to some degree and soon the boat looked like some sort of Chinese laundry on half price day.  As the wind decreased we eased out the genoa over the storm jib, which was on the inner forestay and eventually replaced the tri-sail with the main.  The clouds dissipated and the full moon rose in the early evening.

Starting with this storm, the radar reflector that had been hanging from the port spreaders gradually disintegrated.  The plastic protective corners on it began to work loose and after several attempts to stabilize it, and prevent it shredding the sails, it finally fell apart towards the end of the voyage.

The wind eased throughout the next day and we made good sailing progress.  One of the benefits of this southerly storm was the appearance of albatrosses, in particular sooty and light-mantled sooty albatrosses – my favourites.  They resemble, but on a larger scale, the plentiful sooty shearwaters, which cannot be excelled for their amazing skills over and with the waves.  But nothing beats the albatrosses for sheer majesty.  Worth every second of the storm!

Next Episode  "The Fire and the Gale"