Navigator during WW2 and Midair Collision by Liberators over India

For years my family has been in possession of a photo of my father navigating during WW2. Beside him on the wall of the aircraft (he flew in Ansons, Wellingtons and Liberators) is an escape axe, and what seems to be a crank handle (starting the plane?). We always thought that he was smoking a cigarette (he did smoke) and that such things may not have been uncommon during wartime flying. However I looked at it more closely recently and wondered about the offending cigarette. My brother has blown it up and agrees that it is a bright bit of light shining on his left side collar. So we've  photoshopped it out and it makes a much better impression now. 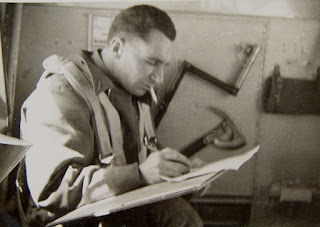 So after all that and with the aid of Google I've managed to also solve another mystery about the end of my Dad's WW2 service.

We had understood that he had always (while based in eastern India and Rangoon with RAF 358 Squadron) had Ray Bullen from Christchurch as his pilot and was upset at the loss of Bullen in an air accident. It wasn't until very recently that I stumbled upon a report of the accident. The crew had been split up towards the end of their service and Bullen was flying another Liberator in a 'formation flying' exercise when two of the planes collided after they suddenly flew into monsoon cloud. Both  Liberators came down and all fourteen crew died. Luckily Dad was not part of the exercise. The whole tragedy was recorded recently including communications with the families and some acrimony about the causes. It makes interesting reading and at one stage there is reference to my father and his other former crew members - all very interesting to discover about 73 years after the incident. The report can be read here.


Interestingly, the accident occurred less than three weeks before the end of WW2. Dad ended up staying on in the Rangoon area for five months (flying out POWs from SE Asia etc) and arrived back in NZ to find all the housing gone and we ended up living in a couple of small army huts for two winters.