What I Learned at School. Part Two

Our science teacher at school was known affectionately as Lou (after Louis Pasteur). Not only was he a good teacher but was a bit of a philosopher. I remember him musing over the nature of some of the newly discovered sub-atomic particles on one occasion - were they three dimensional whorls in the 'ether' he proffered, talking, it seemed, to himself.

One day he said that, instead of the usual chemistry experiment, we were going to do a class experiment on the rate of gaseous diffusion. He placed a large lidded glass jar on his front desk, together with a big-faced clock angled so that he and the class could see it. He explained that the jar contained a malodorous gas and we would determine the rate of gaseous diffusion from the time it would take for us to detect it after he raised the jar lid. He drew a chalk x and y axis on the blackboard, an x axis for distance and a y axis for time. We were siting, about six to the row, for about six rows back from the front and each schoolboy was to raise his hand as he smelled the 'gas'. He raised the lid and started recording the times when hands were raised as each of the students smelled the gas. He ended up with a graph something like this. 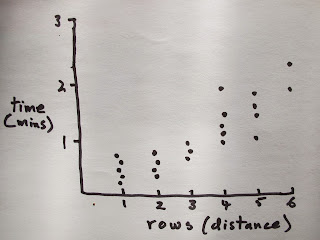 I was sitting in the back row. I could see the hands going up in front of me and, eager show how clever I was, wanted to raise my own. I think it was at shoulder height when Lou called the experiment to an end. He then discussed the nature of the results on the graph and the causes of variability.

Then he confessed that there had never been any gas in the jar. He then told us about the nature of subjectivity and objectivity in science. It was a good lesson and one I never forgot. In observation it often happens that observers often will see (smell) or exaggerate the results they expect to happen - not necessarily deliberately. I had good reason to remember Lou's lesson later in life when I found results in a trial I inherited (and hadn't designed) produced results recorded in a biased way.
Posted by Barry Smith at 16:44